Quite a few years ago, my husband and I went into the firewood business.  It wasn’t our dream job, but it paid our few bills and gave us the flexibility to owner-build our house.  It also was the reason we bought a used Ford F600 flatbed truck.

Homesteaders, we were, and every homesteader these days needs a tractor.  We sought a Ford 8N, vintage early 1950s, a simple little workhorse, and we found one for sale on the food co-op bulletin board.  The seller was another “Back-to-the-Lander” whose marriage had disintegrated, not surprisingly given what we would learn about him on the Sunday morning of our taking possession of said 8N.

The firewood truck had a bed that was eight feet wide and twelve feet long.  We built it a rack made of  hard maple one-inch boards and 2×4 stakes to hold the firewood in place, and eventually we had a lift put on it which turned it into a dump truck and relieved us of the wearying task of throwing the six or seven cords of firewood off by hand at each delivery.  At the time we purchased the tractor, that had not yet been done.  I wasn’t taking many photos in those days, but here’s one taken on the morning of an unfortunate situation in which the loaded truck was partially swallowed by a four-feet-deep patch of previously frozen ooze that thawed with some overnight rain. 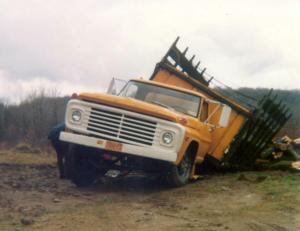 With one not-too-excited teenaged daughter and one little guy in diapers, we gleefully piled into the cab and headed for Waddington, some thirty miles north.  It was a cold April day, and the gray sky pretty much matched the mood of Phil and his wife who were parting with the 8N.  You could see that they had put a lot of work into their place, and we admired the new barn that was housing the tractor and probably had also been a place for a few farm animals.  A dream gone bad.

Of immediate concern was how we were going to get the tractor onto the truck.  The truck bed was four feet higher than the ground.  The usual way to do this would be to find some kind of embankment, back the truck up to it, and bridge the gap between ground and truck-bed with tracks made for this purpose, or with a couple of sturdy planks.  The less the incline and the shorter the distance needing to be bridged, the better.

Phil, perhaps trying to prove his manhood, had no such intentions and was insistent on driving up over planks and cement blocks which he had brought out for the purpose.  He was in no mood to have his sanity questioned.  This meant a total ramp length of about 24 feet – two 12-foot planks stretching from the ground to a small pyramid of blocks, and two more from there onto the truck-bed.  There was no convincing him this wasn’t a very safe plan, and in fact it was all I could do to get him to agree to at least nail the higher planks to the truck-bed.  We sent the kids in the house.

With Phil in the driver’s seat, the tractor purred toward the planks, we said, “Yes, you’re okay so far,” and he started up the makeshift ramp.  He passed the blocks, continuing upward, and it seemed at that moment that perhaps he had been right:  it was working.  Then, apparently concerned that he was, in fact, still centered on the planks, Phil stopped. Our hearts in our throats since he first hit the ramp, we all shouted, “You’re okay, keep going!” and he gunned it.  The front wheels of the tractor made it onto the bed – as the sudden acceleration gripped the planks and sent them flying backwards and out from under the tractor.  The 8N abruptly fell earthward, only to be stopped from crashing on the ground and on top of its driver by the bucket loader which hung up on the tall wood rack on the right side.  Tractor and driver swung wildly back and forth from left to right as Phil tried to jump away from it.  Finally, in what seemed like slow-motion, he jumped to the ground and the tractor gradually became still… still, and hanging with its large back tires about two and a half feet above the ground.

And there we were.  The four of us, silent, walked slowly and solemnly to the house.  It was several minutes before anyone spoke.  We each knew how very close we had come to losing a life.

Getting that tractor back to earth is a story for another day, but I can tell you that same 8N tractor is sitting near our barn as I write this, having served us well now for about 35 years.