Skip to content
Today “the boys” will come over to pick up our old Ford 8-N tractor. Built in 1952, it has served us well since the fateful day in 1979 when we bought it. I say fateful, because it was a day I’ll never forget.
.
The owners, back-to-the-land acquaintances not very unlike ourselves, were splitting/divorcing, and the stuff they’d accumulated for working the land had to go. A divorce is divisive in more ways than one, and apparently this divorce was leaving the male half of the sketch – whom I’ll call Exhibit A – with a strong need to show he knew what he was doing.
.
It was a chilly March day, and we arrived around 10AM with the F-600 flatbed truck we used in our firewood delivery business, expecting, as we’d been led to expect, to back it

up to an embankment or ramp of some kind, but Exhibit A waved off this necessity. He said there wasn’t anyplace we could do that, and he had some planks we could use to drive it up and onto the truck bed.  Keep in mind that this bed was a good four feet off the ground.
.
He produced the planks: 2x10x12s. (If you can do the math, you find that two planks twelve feet long rising to a height of four feet is… well, pretty damned steep). Exhibit A was very hard to dissuade, but there were three of us telling him it was an extremely bad idea, so he hauled out two more planks and some cement blocks with which to make a longer – and therefore less steep – ramp, and this time there was no dissuading. Finally, anxious to get the thing done and get out of there, we caved, and he mounted the tractor. I tried to get him to wait for us to nail the planks to the truck bed, but he drove on.
.
Up the ramp he went – the three of us holding our collective breath – past the cement block support and joint between between planks, and about two feet from his destination atop the truck, and to our amazement, it looked as though he’d been right, that he could just drive the 8-N onto the truck.  He stopped…, calling out, “Am I okay?” Collectively we shouted, “KEEP GOING!!!!!”  He yanked down on the throttle, the burst of speed spun the tractor’s back wheels, sending the planks flying backwards and out from under the tractor, and as it fell, it’s bucket-loader caught on the right side rack on the truck! Ford and driver swung back and forth wildly as he tried to jump off, not sure which way it might fall, as we gasped a terrified breath.  Slowly it stopped swinging and was still. Exhibit A stepped gingerly onto the truck bed and then jumped down to Mother Earth.
.
No one spoke. Silently, we all walked to the house. Tea was made in silence as our minds re-ran the near tragedy we had just witnessed.
.
Eventually, we returned to the yard and the dangling tractor.  Its rear wheels were nearly three feet off the ground.  We chain-sawed a vertical line down the side rack of the truck, separating the tractor-hanging section from the rest of the rack, and then I took over the engineering. Exhibit A wisely kept his mouth shut.
.
The task involved a lot of used tires and a rope, and it’s a bit long to describe, but several hours later my husband was driving an empty Ford F-600 and our two kids the 35 miles back home, and I was learning to drive the other Ford.  It had to be that way because my legs weren’t long enough to reach the pedals in the truck.
.

‘Funny the skills you accumulate over the course of a lifetime: driving a nail, mending a mitten, riding a horse, baking an apple pie, tap dancing, writing a blog.  Many of them you don’t ever think about, but now and then a learned skill might catch your notice as something that sets you apart from the pack.

In my case, being able to insert four fingers in my mouth and rip off a loud, shrill whistle has always seemed to me to be one of those things that elevate me to a place most girls don’t get to.  It’s good for calling a crowd to order or summoning a dog, not to mention the fact that people are impressed.

And although you often hear somebody say, “I smell a rat!”,  I really can.  This doesn’t happen very often, but yesterday, in the barn, there it was:  my nose, and the unmistakable aroma that falls somewhere between piss, vinegar, and old sneakers.  I’d forgotten all about rat-smelling as part of my skill-set, but yup, sure enough, I, my friends, have it.

It’s funny what life in the country can teach a girl.  And now I need to impart that knowledge to the cat.

These days I am acquainted with many wonderful and amazing people because of my art. In these artists there exists the possible, the unusual, the unique, the weird and the beautiful, expressed in form, movement, sound, image, rhyme and probably a dozen other sorts of vents for the fire within. One such person is named Hope, and besides being a wonderful digital and photo artist, she is also a healer. I learned this because I mentioned having to fit a volunteering commitment in around a health issue.

Holding a small mixed media sculpture in front of me, Hope asked me to place my hands on two blue stones which were intregal to the piece. She held stones on the opposite side and closed her eyes. As perhaps a minute passed, I could feel a slight tingling in my arms, and then she opened her eyes and smiled, saying it had worked and that she could also feel my energy coming back to her.

Twenty-two hours later I was standing in line to pay for a delicious plate of organic, vegetarian food at The Table restaurant in Ottawa’s west end. A young woman in front of me struck up conversation, as women will often do when sharing such a wait. Her wavy, shoulder-length hair simply parted, she radiated a glow that didn’t come from make-up, and she brought to mind a painting from a long-ago art history class. Yes, the food is wonderful, no it isn’t the first time I’ve eaten here. “I’m excited because I think there are things here my grandson could eat! He’s allergic to lots of things; soy, dairy,” I said. 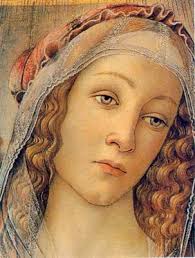 That statement somewhat startled me, but I don’t think I let it show.  Good grief, I thought, another wack-o Christian, but I replied sure, if she’d like to.  I imagined she meant later, so it was quite surprising to hear her – still glowing and radiating that beautiful, peaceful smile – speaking words of blessing softly beside me.  Even more surprising was that no particular god or son thereof was being mentioned.

“What is your name?” she asked, “Judy,” I answered, and she ended her words of blessing with “and his grandmother, Judy, to whom he brings so much joy.”

And then she turned and walked away.

I joined my husband at a small table near the window and told him that I thought I had just met an angel.

Were the encounters with these two women coincidence? I’ll never know, but they profoundly impressed me and gave me a great deal of food for thought.

The painting posted here is Botticelli’s Madonna. I have not been able to find the image that came to my mind at The Table, but this one is similar to it and would be perfect if Madonna were radiantly smiling.

My life is indeed blessed. May prayers and healing be affirmed.

Anyone familiar with the “Go ye Heroes” song from Pirates of Penzance? The women sing words of cheer to the men marching off to war:

MABEL: Go, ye heroes, go to glory,
Though you die in combat gory,
Ye shall live in song and story.
Go to immortality!
Go to death, and go to slaughter;
Die, and every Cornish daughter
With her tears your grave shall water.
Go, ye heroes, go and die!

Meanwhile, the men start marching off to war… but make a U-turn around the town fountain and march back to the women… who keep singing cheerfully about them heading off to die. So off they go again, only to make the same U-turn and return, obviously not as enthusiastic about their bloody demise as the women seem to be. After about three times around the fountain, and the women exclaiming, “YES, BUT YOU DON’T GO!” they finally do march off the stage – as the women sing “At last they go, at last they go!!!”

My point? Winter is behaving like those poor schmoes in Pirates: Yes, but you DON’T go!!!”

When my mother was a kid attending a 1-room schoolhouse, she was in a pageant or show put on for the parents.  Her part was to be a woman in a sewing circle, and the “ladies” in the circle each had lines that rhymed.  My mother’s started thus:  “Mrs. Kay the other day had the audacity to say… ’tis a common supposition that one in her position…”, and the gist of it was that someone had made an unkind reference to her age.  My mother’s brother bet her A QUARTER(!) that she didn’t have the nerve to change her lines.

On the night of the show, he was standing on a chair against the wall opposite the performers when my mother looked him square in the eye and said what he’d bet her she didn’t have the nerve to say:  “Mrs. Kay the other day had the audacity to say THAT MY FACE LOOKED LIKE IT WORE OUT THREE BODIES.”